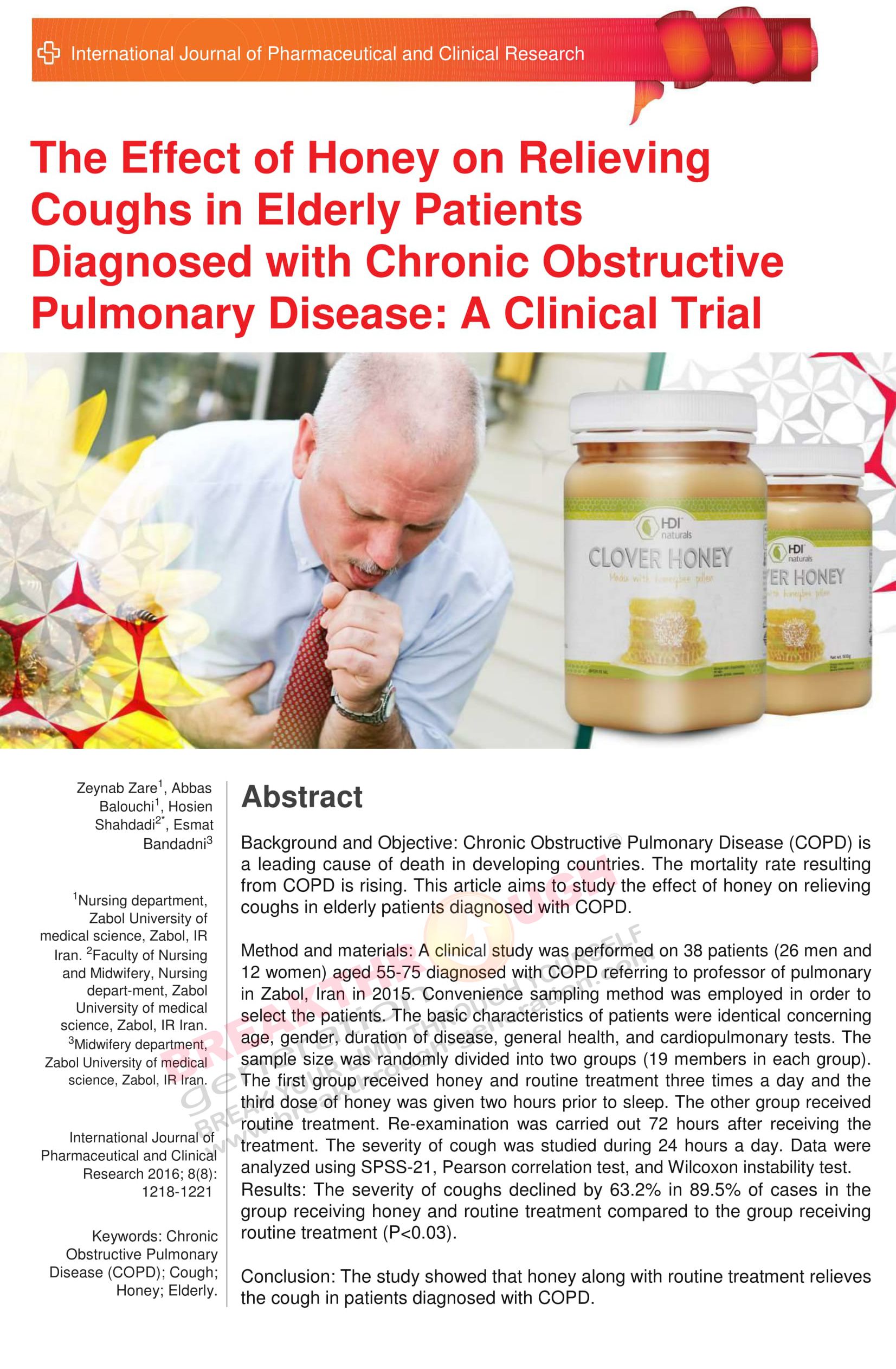 The elderly are the most vulnerable members in society exposed to various diseases due to decline in body performance1. Ageing is, in fact, a part of the natural process of human life. Lapse, diseases, physical and mental problems, and environmental conditions are important factors affecting the trend2,3. Although the changes caused by ageing are inevitable, most of them can be somewhat prevented or delayed. COPD is one of debilitating diseases in elderly. It is an incurable and progressive disease characterized by permanent obstruction of out-flow air from the lungs4. World Gold Council defined COPD. COPD is completely irreversible airflow obstruction. This is a progressive disease associated with abnormal inflammatory response of the lungs to harmful and dangerous particles and gases5. COPD is a non-communicable disease which is the subject of interest for public health officials worldwide5. Chronic Obstructive Pulmonary Disease (COPD) is a leading cause of death in developing countries. The mortality rate resulting from COPD is rising6. COPD consists of two distinct diseases (chronic bronchitis and asthma).

Although these two processes are separate, they come along with each other7. After cardiovascular disease, cancer and cerebrovascular disease, COPD is the fourth leading cause of death in the US. COPD diagnoses indicate that, by 2020, COPD would shift from the sixth to third cause of death worldwide8. COPD is also estimated to be a debilitating disease after ischemic heart disease, major depression, traffic accidents, and cerebrovascular disease in 2020. The most important causes of COPD are host factors (genetics, a1 deficiency, antitrypsin), and environmental factors such1 as smoking cigarette, air pollution, and dust. Phlegm cough, shortness of breath, and wheezing are some of COPD symptoms9. Three common symptoms of COPD include cough, sputum production, and exertional dyspnea. Many patients have these symptoms even after months and years because the obstruction of air flow is a gradual process9. Chronic cough is usually the first sign of COPD. If the cough continues for more than three months in a year and two months in a row with sputum production with no reason, it could be a sign of chronic bronchitis. Severe coughing can cause breaking ribs and short loss of consciousness10. 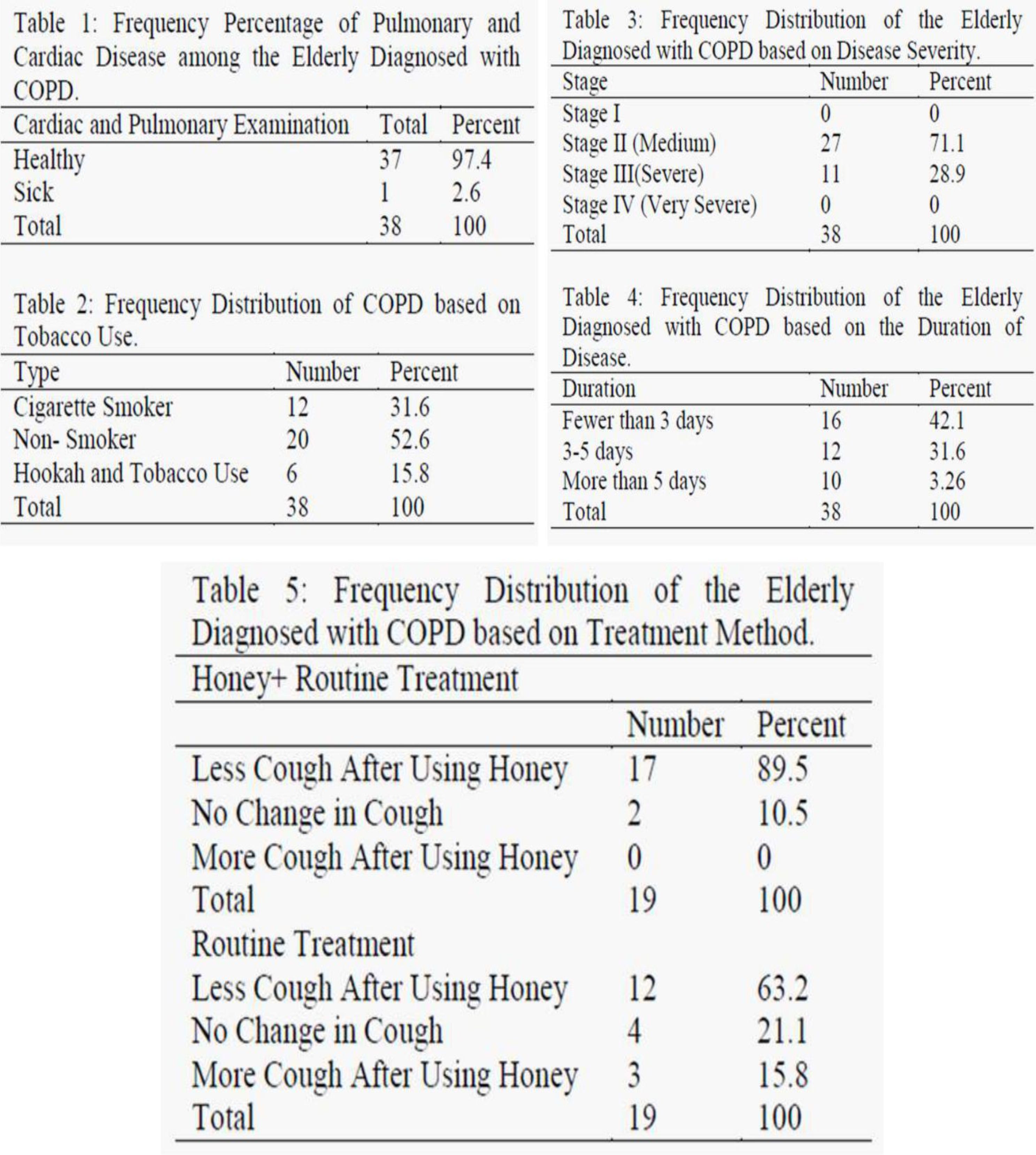 The treatment is very difficult and depends on the disease progresses, person's physical condition, and other underlying medical disease. Today, various medications are used to treat COPD including antibiotics, mucolytics, anti-inflammatories, and bronchodilators along with training for better life and quitting smoking. Salbutamol and dextromethorphan are two prescribed medications. Based on the results of multiple studies, the effect of these two mediations has not been more than placebo11. They are associated with multiple side effects such as drowsi-ness, dizziness, and tachycardia12. In addition to supportive therapy including normal saline for secretion reduc-tion and adequate fluid intake, the consumption of honey, camphor, and eucalyptus oil with herbs (lemon) have been proposed in different articles13. One study reported successful and rapid improvement of cough by using honey and coffee14. Phenolic compounds of honey are likely to be effective in cough relief through the antioxi-dant and sweet property producing opioids androgens14. Considering the high consumption of medications such as dextromethorphan for relieving cough in COPD patients, multiple side effects of antitussive drugs in elderly patients, and few studies conducted concerning the use of effective and inexpensive treatment such as honey, this article aims to study the effect of honey on relieving cough in elderly diagnosed with COPD.

A clinical trial was performed. Convenience sampling method was employed. A total of 38 patients (26 males and 12 females) aged 55-75, referring to pulmonologist clinic in December 2014 and January 2015, entered the study. They were diagnosed with COPD. The criteria to enter the study are as follows:

Unwillingness to participate in the study or use honey; upper and lower respiratory tract disease; the risk of sinusitis, allergies, and tuberculosis; reactive airway diseases; lack of self-medication by patients; adding medications to prescribed treatment; and lack of using honey were considered criteria to be excluded in the study. In total, 53 patients were studied. A total of 38 patients were qualified to enter the study. The patients were first examined by a pulmonary specialist. The patients entered the study after explaining the procedure and obtaining consent. The devised demographic questionnaire was completed (age, gender, duration of disease, vaccination record, tuberculo-sis, residence, cigarette and tobacco consumption, disease severity according to Gold (mild stage, medium stage, severe stage, very severe stage), and weight). Cardiac and pulmonary examination was performed by a professor of cardiology in the same building of pulmonologist based upon the pulmonologist`s written request. Then, patients were randomly divided into two 19-member groups. The first group received honey and routine treatment. One tea spoon of honey was prescribed three times a day with the meal. The minimum dose was applied in order to prevent the loss of appetite. It was also prescribed during the meal in order to prevent the forgetfulness. The third dose was prescribed prior to sleep. The second group received the routine treatment (22). In order to study the effect of honey, all patients were asked to use the same brand of honey (Khumein). Khumein honey is one of the most acces-sible and cheapest1 brands of honey in Iran. After 72 hours of the initial examination, the patients were re-examined. The cough improvement trend (less cough, no change in cough, more cough) were recorded22. Questions were asked from the patient's closest companion in order to prevent the intervention of factors such as anxiety or any other possible factors. Data were analyzed using SPSS, Pearson correlation, and Wilcoxon instability test. The signifi-cance level was considered less than 5%. The data were collected by the researcher through patients' records. 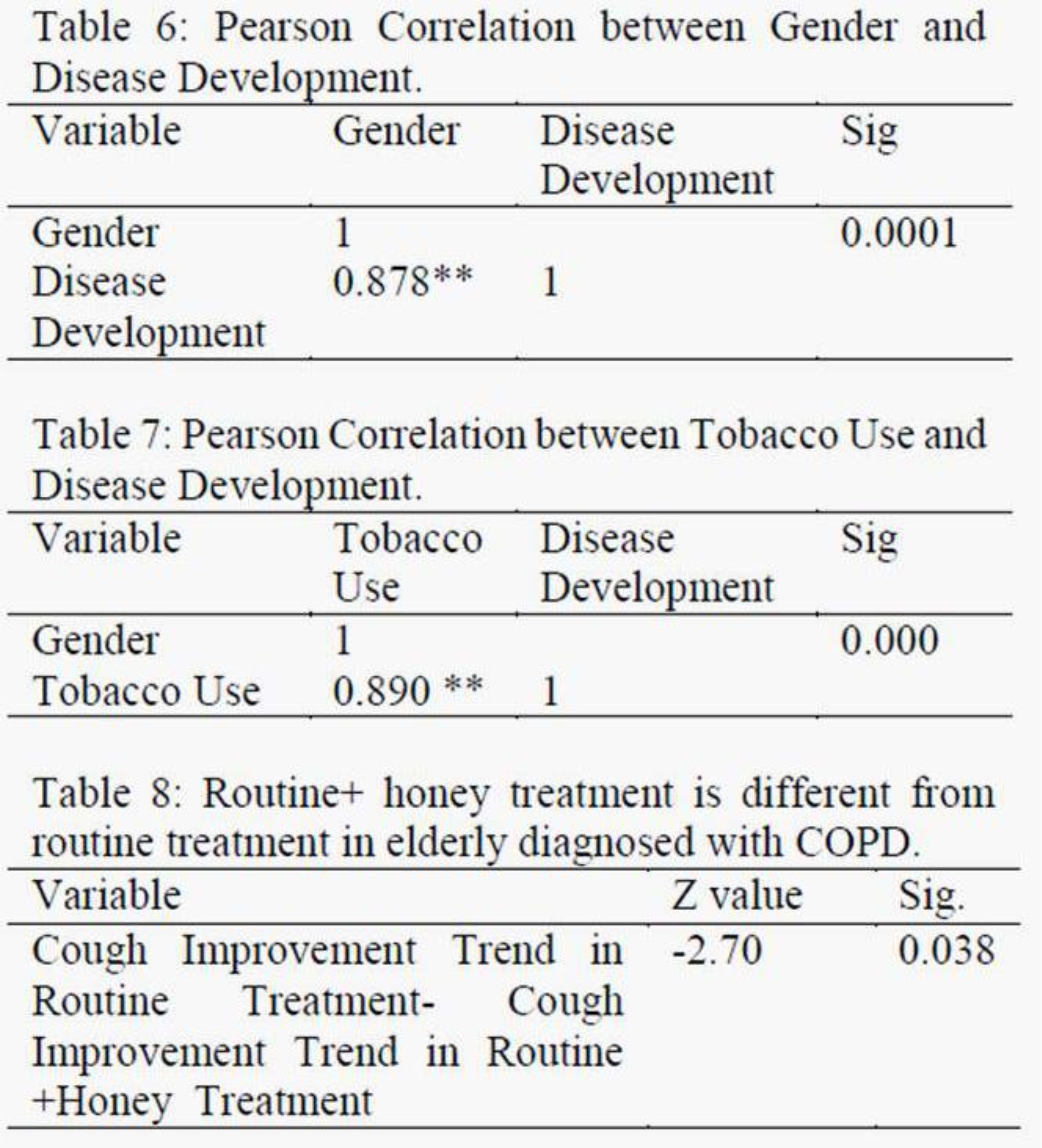 The all of 68% of patients were male and 32% were female. 55.3% of patients were 55-65 years old and 44.6% were aged 66-75. The highest frequency was reported in 55-65 year-old age group. 84% of patients were urban resident in the city and 16% were rural residents. A total of 37 healthy individuals were detected concerning cardiac and pulmonary examination. One patient was referred to the physician in this regard. Four stages were taken into account. 27 patients were in the second stage and 11 were in the third stage. No patients were found in the first and fourth stages. Concerning the duration of disease (the onset of cough), the patients were classified in three groups: 16 patients, fewer than 3 days; 12 patients, 3-5 days; and 12 patients, more than 5 days. The following results were drawn in two methods (Routine and Routine + Honey)

SUSPECTED CASES ARE HIGHER IN MEN THAN IN WOMEN.

According to the above table, the correlation coefficient is 0.878. Sig. level is less than 5%. Therefore, gender has a direct and significant relationship with disease development. It means that suspected cases are higher in men than in women.

SUSPECTED CASES ARE HIGHER AMONG THOSE WHO USE TOBACCO

According to the above table, the correlation coefficient is 0.890. Sig. level is less than 5%. Therefore, at 95% certainty level, tobacco use has a direct and significant relationship with disease development. It means that suspected cases are higher among patients who use tobacco. Wilcoxon nonparametric test is employed to study the existence of difference between two methods. Considering the significance level which is less than 5%, significant difference is inferred between two methods. As descriptive statistics show, 5 more patients improved by honey than routine treatment. The number of individuals in which their conditions worsened was zero in honey group, while 3 patients experienced worsened situation after routine treatment.

This article aims to study the effect of honey on relieving coughs in elderly patients diagnosed COPD. Men frequency was far higher than women (68% opposed to 32%). Frequency of urban and rural residents was 24% and 16%, respectively. Since the study was conducted in clinic, another study is required to study the prevalence of the disease among more elderly patients. In this study, non-cardiac and pulmonary disease was higher than cardiac and pulmo-nary disease so that 97.2% of patients were reported with healthy cardiac and pulmonary examination. Only 2.6% had cardiac and pulmonary disease. In the study conducted by Decramer (1997) among COPD in-patients in the US, the most common underlying diseases were blood pressure (16.7) and heart disease (15%) which is consistent with our study15. The study conducted by WHO (2010) in South Africa reported past history of TB as one of underlying reasons16. This is a dramatic figure considering the high prevalence of AIDS and low socioeconomic status in South Africa. In this study, no patient was in the first stage of disease based on Gold criteria. This is likely associated with mild symptoms and not referring to physician. This shows the need to establish an appropriate screening system in mild stage (stage I) and prevent the intensification. On the other hand, high cost of health services and patients` inability to pay such cost cause delay to visit the physician. In our study, 52.6% of patients were non- smokers, while 15.85 were smokers17. This is associated with few samples, cultural issues, and norms in society. In the study conducted by Satarug (2004) in Australia, 40% of patients were smokers (). The results are inconsistent with this study18. The sever-ity of coughs declined by 63.2% in 89.5% of cases in the group receiving honey and routine treatment compared to the group receiving routine treatment. In the study conducted by Shadkam et al., using 2.5ml honey prior to sleep relieved coughs better than dextromethorphan19. Using honey and coffee significantly and successfully improved cough in a short period of time in upper respiratory patients in the study conducted by Raeesi et al. This might be associated with the effect of coffee. No separation was made between coffee and honey12. In the study conducted by Papros and Hendlay, the cough resulting from upper respiratory infection improved. The comparison was made with no-treatment group11. In this study, we investigated the effect of honey on relieving coughs in elderly patients diagnosed COPD and the results were investigated by the physician. More information was taken from the patients` companions in order to ensure the accuracy of responses concerning cough relief. Researchers are, however, advised to observe the quality and quantity of coughs prior to and after the honey consumption in future studies. Lack of clear criteria concerning honey dose is a limitation in this study. Therefore, determining the honey dose is advised.