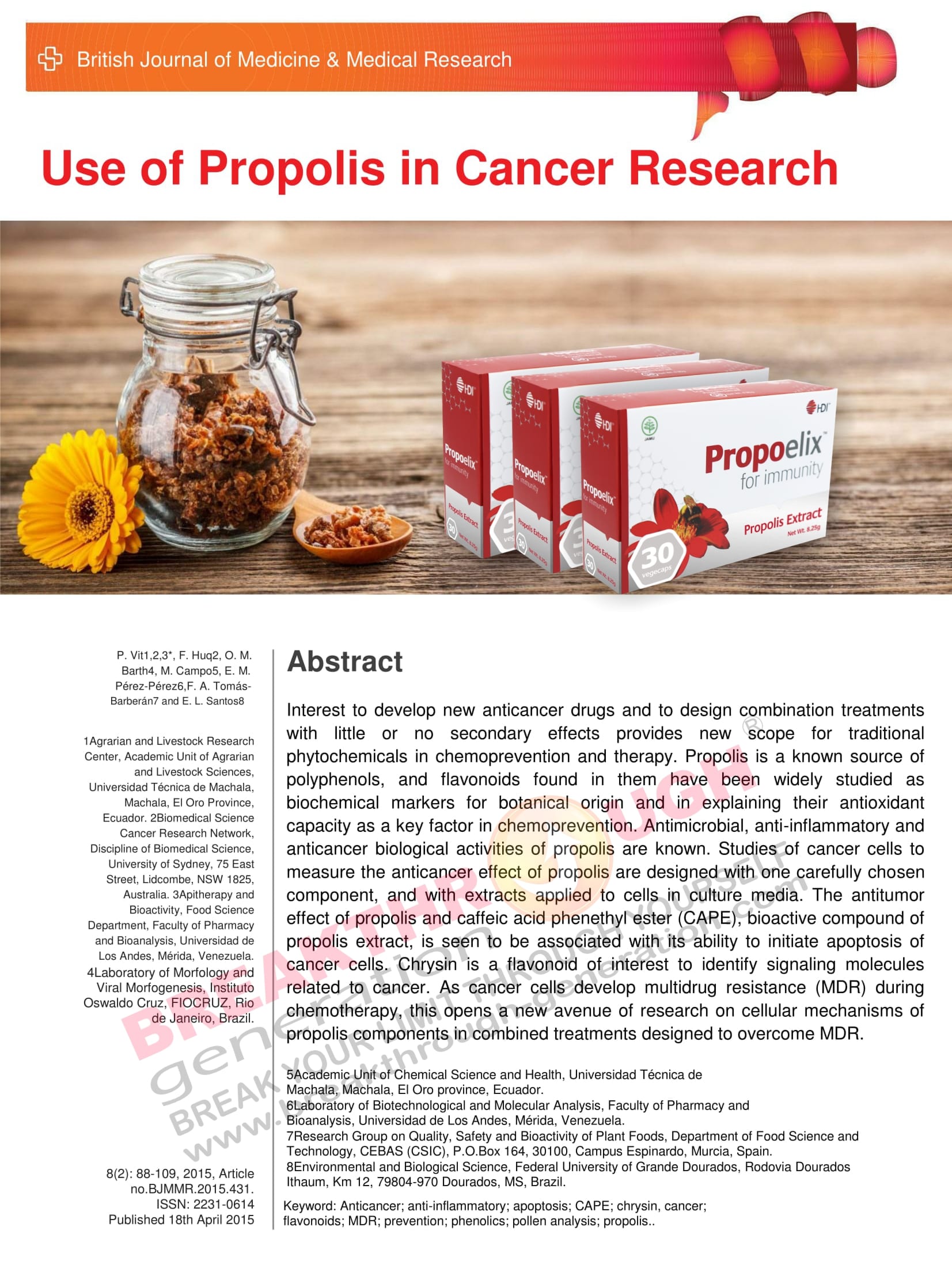 Natural products have afforded a rich source of compounds that have found many applications in cancer chemotherapy. Furthermore, the vast structural spectrum of natural compounds can provide lead compounds for therapeutic improvement by molecular modification. Over 70% of anticancer compounds are either natural products or substances derived from natural products. Also, conjugation of toxic natural products to monoclonal antibodies or polymeric carriers can lead to more efficacious targeted therapies. Since less than 15% of higher plants have been systematically investigated, the research into natural products as chemotherapeutic agents requires further attention and multidisiplinary scientific collaboration.

Propolis is a honeybee product with many biological properties, including immunomodulatory, anti-inflammatory, antioxidant, antibacterial, antiviral, antifungal and antiparasite activities, among others. The antitumour activity of propolis has been recently reviewed. In fact, propolis is frequently mentioned in the literature as an antitumoural and immunomodulatory agent. In recent years, in-vitro and in-vivo assays have provided new information concerning its mechanisms of action, and data have been compiled from several laboratories focusing on its chemical composition, botanical sources and biological properties. In-vitro assays have shown the cytotoxic action of propolis and its isolated compounds on various tumour cells. Propolis and its isolated constituents also exert antitumoural effects in vivo, caused by an immunomodulatory action, mainly due to the augmentation of non-specific antitumour immunity via macrophage activation, which in turn could produce soluble factors and interfere directly with the tumour cells or in the function of other immune cells.

The great number of publications on the antitumour action of propolis and its compounds reveals their potential in the development of new antitumour agents. Since propolis administration to humans or rats does not lead to side-effects, propolis could potentially be a relatively inexpensive cancer treatment. In this review, we describe the antitumour potential not only of propolis extracts but also of flavonoids, terpenes and caffeic acid phenethyl ester

Propolis has received significant attention in recent years from researchers and the food industry. The composition of propolis is very complex and it contains mainly waxes, resin and volatiles. The main chemical groups present in propolis resin comprise phenolic acids or their esters, flavonoids (flavones, flavanones, flavonols, dihydroflavonols and chalcones), terpenes, aromatic aldehydes and alcohols, fatty acids, stilbenes and b-steroids.

Different solvents solubilize and extract different compounds, with ethanol, methanol and water being the most common extracts used in biological assays. The ethanolic extract of propolis (EEP) is one of the richest sources of phenolic acids and flavonoids. EEP and its phenolic compounds have shown various biological activities, including immunomodulatory, chemopreventive and antitumour effects.

Studies have been carried out using propolis from different geographic regions. Although interesting, this makes the standardization of biological assays difficult, since different propolis samples may have different chemical compositions and so do not allow comparison between results. As reported elsewhere, a universal standardization would be impossible and propolis biological action should be linked to its chemical composition and plant sources. The clinical application of propolis in cancer and other diseases has been limited due to its low aqueous solubility and, consequently, minimal systemic bioavailability. Nanoparticle-based delivery approaches have the potential to render hydrophobic agents such as propolis dispersible in aqueous media, thus avoiding possible low solubility. Propolis nanofood inhibits pancreatic cell growth in murine xenograft models; moreover, these effects were accompanied by a potent anti-angiogenic response and should facilitate the eventual clinical application of this well-known but underused therapeutic agent. No host toxicity was seen when maximal volumes were administered to mice. A similar therapeutic efficacy of free propolis against a panel of human pancreatic cancer cell lines was demonstrated in vitro, as assessed by cell viability and clonogenicity assays. All these data show that researchers from different countries have been interested in the antitumour properties of propolis and, in more recent years, the effects of isolated compounds have been investigated as well.

Propolis is produced by bees from a mixture of resins, pollen and plant waxes, and flavonoids are its main group of compounds in some geographical regions. Chrysin (5,7-dihydroxyflavone) is a natural and biologically active flavonoid compound extracted from honey, plants and propolis. It possesses anti-inflammatory, anticancer, anti-allergic, anti-anxiolytic and antioxidant properties, and disturbs cell cycle progression. However, the mechanism by which chrysin inhibits cancer cell growth and the intracellular pathways remain poorly understood. A significant decrease in human telomerase reverse transcriptase expression levels was verified in cells from leukaemia patients treated with Manisa propolis, due to chrysin. The cytotoxic effect of polyphenolic/flavonoid compounds on different leukaemia cell lines was evaluated using five different flavonoids (quercetin, caffeic acid, chrysin, naringenin and naringin) and five leukaemia cell lines (MOLT, JURKAT, HL-60, RAJI and U937).

Quercetin exhibited the strongest cytotoxic effect on all cell lines, although caffeic acid and chrysin also showed a high cytotoxic level. Several Brazilian red propolis constituents were investigated and 7-hydroxy-6 methoxyflavanone exhibited the most potent activity against B16-BL6, LLC and HT-1080 cancer cell lines, while mucronulatol was efficient against Lewis lung carcinoma and A549 cancer cell lines. These data suggest that both components are promising for future anticancer drug development.

Caffeic acid phenethyl ester (CAPE), a phenolic component of propolis, has been widely studied. This compound hasthe biological events involved in any stage of carcinogenesis can decrease cancer incidence. The protective action of Brazilian EEP was evaluated on 1,2 dimethylhydrazine (DMH) induced colon carcinogenesis in rats. EEP administration after DMH initiation led to a smaller number of aberrant crypts in the distal colon, suppressing the development of preneoplastic lesions. It has been reported that Brazilian AEP significantly reduced DMHinduced DNA damage in colon cells, but it did not suppress the development of aberrant crypt foci in rats. Diethylnitrosamine is a hepatotoxic and a carcinogenic substance used as an initiating agent in some two-stage (initiation-promotion) protocols for hepatocarcinogenesis studies in rats. Hepatocyte proliferation is an important parameter in the development of liver cancer induced by genotoxic carcinogens in rats. During cancer initiation, regenerative hepatocyte proliferation is presumably required to fix the mutational event. Proliferation leads to the clonal expansion of initiated cells that form hepatocyte nodules during cancer promotion.

The effects of Brazilian AEP and EEP on azoxymethane induced aberrant crypt foci in male Wistar Hannover (GALAS) rats were investigated, suggesting that both extracts possessed a chemopreventive ability in the early phase of colon carcinogenesis, modulating cell proliferation. The chemopreventive influence of a Brazilian AEP in a two-stage (initiation-promotion) medium-term bioassay for chemical liver carcinogenesis was evaluated. Male Wistar rats were sequentially initiated with diethylnitrosamine and exposed to a diet containing hexachlorobenzene and to AEP. Data showed that propolis 0.1% did not protect against the development of any of the differentially identified putative preneoplastic foci in diethylnitrosamine-initiated animals, exerting no chemopreventive effect on the chemically induced hepatocarcionogenesis in rats. The effect of dietary supplementation with chrysin was investigated on proliferation and apoptosis in diethylnitrosamine-induced carcinogenesis.

Possible Mechanism of Action of Propolis and its Compounds Exerting

The main mechanism of action of propolis and its compounds, regarding their antitumoural action, are related to apoptosis, cell cycle arrest and interference on metabolic pathways. Considering the antiproliferative activity of propolis on certain neoplastic cells, an attempt has been made to evaluate its growth inhibitory activity on cancer cell lines and to provide new information about cancer therapy. It has been proposed that the inhibitory effect of propolis on human prostate cancer proliferation was achieved by regulation of cyclin D1, B1 and cyclin dependent kinase as well as by p21 expression. It is known that polyphenols play an important role in cancer chemoprevention. Molecules of TRAIL take part in immune surveillance and defence mechanisms against tumour cells. Some cancer cells are resistant to TRAIL-mediated cytotoxicity. There is a great deal of experimental evidence showing that polyphenols sensitize TRAIL-resistant cancer cells and markedly augment TRAIL-induced programmed death in cancer cells. Szliszka and Krol have described dietary polyphenols targeting the TRAIL mediated apoptotic pathway. Chrysin reduced melanoma cell proliferation in both human and murine melanoma cells due to intracellular accumulation of protoporphirin IX. Chrysin also induced cell death in human and murine melanoma cells through caspasedependent mechanisms, involving down-regulation of ERK 1/2 and activation of p38 MAP kinases.

The in-vitro anticarcinogenic and antimitotic effects of propolis and mitomycin-C on transitional carcinoma cell cultures have been investigated. Using tissue samples from patients with bladder carcinomas, it was verified that the exposure to propolis can decrease cell division, suggesting its use as an antimitotic and anticarcinogenic agent. Mucronulatol is one of the most cytotoxic substances present in Caribbean propolis. Mucronulatol exerts cytotoxicity in cancer cell lines by targeting the control of cell cycle progression, indicating that the mechanism of action of this compound involves interference with the cell cycle machinery. CAPE-induced oxidative stress may influence the radiosensitivity and proliferation of medulloblastoma cells. The results indicated that CAPE inhibited the growth of Daoy (human medulloblastoma) cells, demonstrating that the antiproliferative and radiosensitizing effects of CAPE on medulloblastoma cells may be achieved by depleting glutathione, increasing reactive oxygen species activity and inhibiting nuclear factor-kB activity. The effects of Chinese propolis and its constituents (chrysin, galangin, pinocembrin, caffeic acid and CAPE) were evaluated against tunicamycin-induced neuronal cell death in SH-SY5Y cells. Chinese propolis and chrysin inhibited staurosporine-induced cell death. These findings indicate that the inhibitory effects of Chinese propolis against neuronal cell death induced by endoplasmic reticulum stress or staurosporine may be exerted primarily by chrysin.

Although recent advances have been made in tumour detection and treatment, the development of metastasis remains a significant cause of morbidity and mortality from the disease. Thus, blocking the tumour progression is a crucial goal for chemoprevention. The mechanisms involved in the chemoprevention by propolis are not fully understood, but one may suppose that the interference by one or more propolis components in mutagenic/carcinogenic metabolic pathways or its putative antioxidant activity could explain its effects on DMH genotoxicity. Although some studies have demonstrated the mechanisms of action of propolis and its constituents, further investigations are needed to understand how they exert antitumour effects in humans and animals. 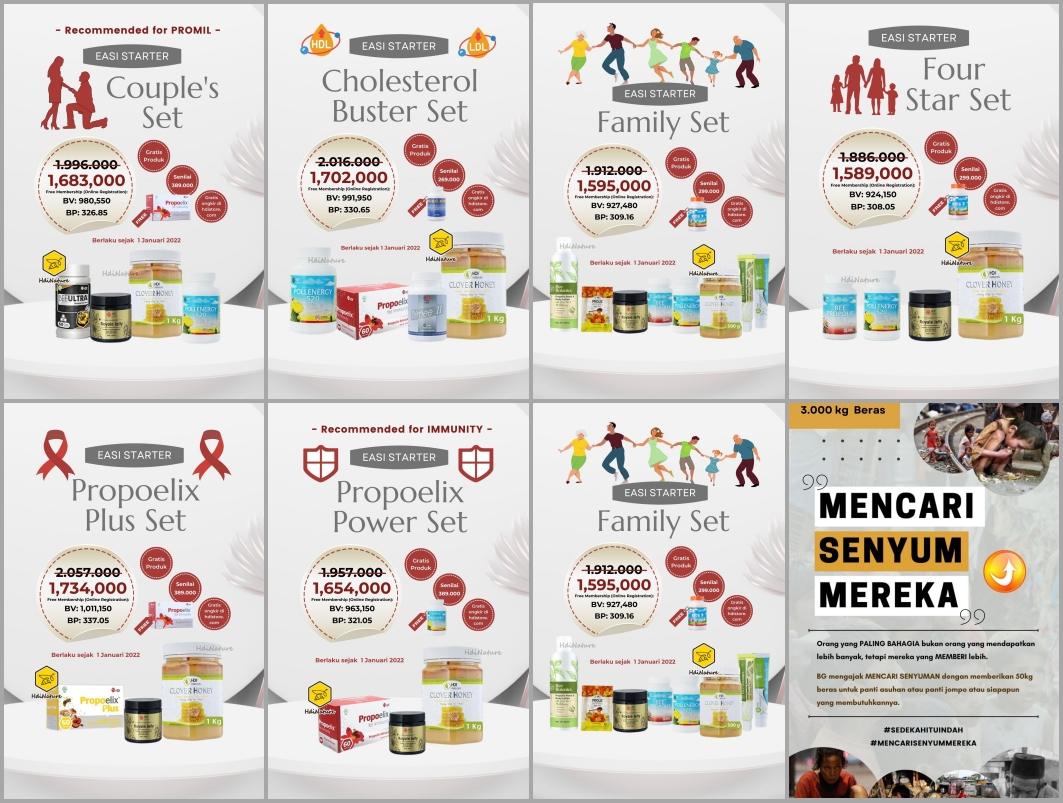